"So We May Never Forget Why We Walk" 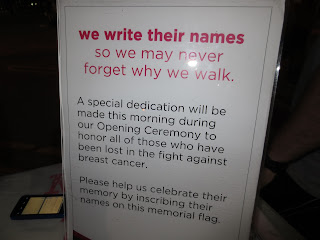 I walk, every year, in honor of my mom, Muriel Kessler, my childhood friend Cynthia, and my friends Phyllis and Bee.  All these women are survivors and I dedicate my walk to them.
I wrote about Maureen Flynn a lovely young woman who lost her battle earlier this year. I made a promise that I would walk in memory of Mrs. Flynn and that was one of the promises I kept. 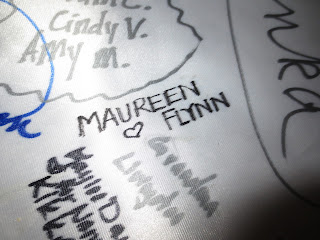 I wrote her name on this memorial flag that was raised at opening ceremonies. 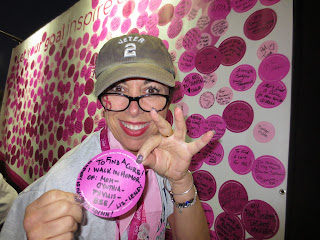 Mom's and Cynthia's and Phyllis' and Bee's names went on another banner for all to see that first day.
I will never forget why I have walked 420 Komen miles.
I would be happy not to have to walk another Komen mile.

While on route, one of the crew always told Burt
"This is my last year."
"Why?" Burt would always ask.
"Because this is the year they find a cure." he always responded.
This is the year ...
I would be delighted to never walk another Komen mile!
Posted by Unknown at 8:15 PM No comments: 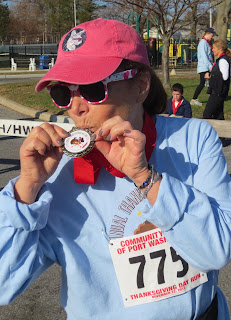 Wow!  I didn't want to do it ... but I had to start a new blog!  My old walker blog would not upload new photos.  "Not enough space!" it said.  So here I am.
The picture is from the Port Washington Turkey Trot.  I walked with Joan, Robin, and Irene. 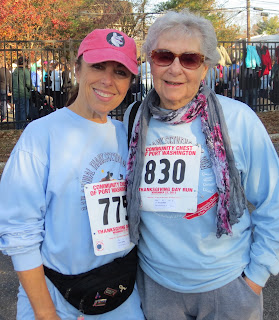 You remember Joan.  This year she came in 1st in her class.  I came in 14 out of 15.  Hey ... we were strolling.  Next year we will power walk!
...
Four days after Hurricane Sandy crashed onto Long Island I boarded one of the first planes out of Kennedy and flew to Dallas.  People asked if I was relieved to leave New York.  The answer is that I had mixed emotions about leaving Ronnie.  I was leaving him and the boys in a cold, dark place. We were only inconvenienced, though. The devastation and loss of life due to this super storm is horrifying. It wasn't until I reached Boston (my connecting flight to Dallas) that I saw live pictures of what Sandy had done to New York and New Jersey.  Radio and still pictures couldn't tell the whole story.
We are thankful that our lives have returned to normal ... and pray for those who lost so much.
On to Dallas ... 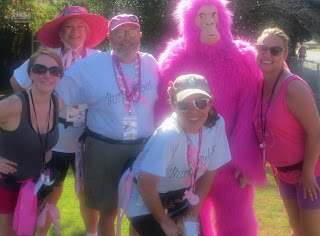 Dallas was experiencing a late season heat wave!  We walked in 90 degrees our first two days. This guy in the pink gorilla suit (I am assuming it was a guy!) was on the route all three days! YIKES!  He had to be hot!  This is our little team of walkers.  We lost (walker) Sandy due to a complicated work schedule, and Liz and Win due to the hurricane.  Team "Burt's Babes" shrunk from eight to four ... but we had a great 3-day walk. 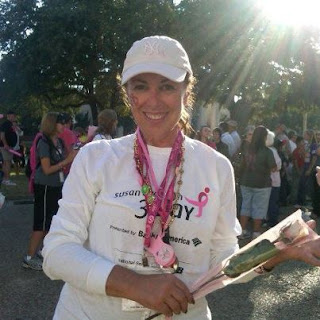 Here I am 60 miles down.
I made it through another two nights of sleeping in a pink tent ... showering in a truck ... and using port-o-potties.
My final fund raising tally was $6161.50.
THANK YOU!
...
So the blog title has changed again.  Next July I will be going home!  I will be walking in BOSTON! This time I will be ready for walking in 90 degree heat. I have less than a year to train and raise funds.  I hope you will come along again and support me and the 3-day as you always have.
Posted by Unknown at 5:51 AM 3 comments: 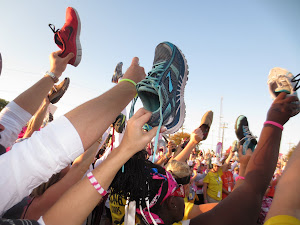 This salute to the survivors is the end of every 3-day walk.